Slack Enhances its Services With the Integration of Actions

If you’ve followed our blog posts for the past while, you may already be familiar with Slack, a communication platform for businesses and organizations. The application has become increasingly popular over the past four years, with 8 million daily users, according to the company. Slack is not only perfect for remote teams, but also quite useful for communicating with colleagues when they’re buried in a task and unable to chat in person.

Slack is consistently updating and improving the application. In fact, just yesterday, Slack announced a new feature called Actions, a third-party software integration, which enables users to consolidate other productivity tools into the communication platform. 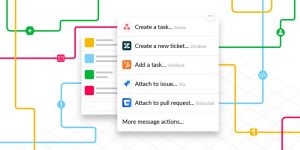 Slack has partnered with various productivity companies to integrate their services into Actions. A few of the companies involved are listed below:

The update presents Slack’s broad service offering, which allows users easily organize, delegate and create tasks. According to Slack, Applications can be used by first installing the desired third-party applications if you haven’t already done so. Secondly, users may hover over the Slack comment to then bring about the new drop down menu and simply select which action they would like to take, such as creating a task with Asana. As TechCrunch states, the task appears in the chat and is also transferred over to the actual platform.

Slack stated that they will be releasing Actions on desktop throughout the month and then follow with the release of Actions on mobile devices.