Mythbuster: Why Is My iPhone So Slow?

In the last few years, it may feel as though Apple has come out with more iPhone versions than the regular consumer can keep up with. For many of us still holding on the the 5, 5s, or the 5c, it may feel as though we are wavelengths behind in the phone department. While this may be true, you may be surprised to learn that the first wave of iPhone 5’s were released in 2012, over five years ago today. With the 5s and 5c coming out just a year later in 2013,

Since then, we’ve seen the release of the 6 and 6 Plus, both in 2014, and the 6s and 6s Plus not too long after in 2015. Apple Pay, more advanced cameras, and new touch displays were big features of these phones. The iPhone 7 and 7 Plus were released in 2016 – they got rid of the familiar headphone jack and instead created an adapter for the lightning jack. The camera also got even sharper on the 7 Plus. Earlier in 2017, the iPhone 8 and 8 Plus came out – and portrait mode was introduced for the first time. Finally, the much anticipated iPhone X was released just a few months ago, and it completely changed the phone design and capabilities.

However, with each new version release, the majority of the population, who was still holding on to a perfectly good, slightly older phone, may have noticed the speed felt slower, touch was not as responsive, and everything took that much longer to load. Is this a myth, or a psychological response connected to some sort of placebo effect that Apple wants us to feel? The answer came to us yesterday, when the company announced that it was slowing down older iPhones with lower-capacity batteries. 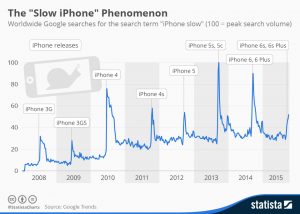 The reasoning was to ‘prevent accidental shutdowns’, something that occurs when the phone’s operating system draws on high power for a short amount of time – and it supposedly drains less from current battery life capacity. Since all iPhones, no matter the version, the network, or the country, work on the same update schedule, each new version of iOS actually aids in making your phone just that much slower. So, it’s not a myth, and you haven’t been imagining it! The further away you stay from the latest released phone, the slower it is likely to be with all the new software updates.