Instagram has been able to differentiate its video platform from YouTube with the one minute video limit, while successfully giving users, influencers and businesses a platform to quickly share a video or advertisement. However, Instagram has just announced the launch of IGTV, which drastically changes the whole Instagram video landscape. 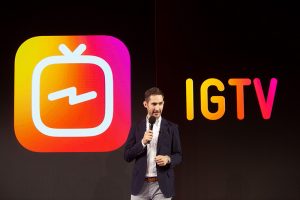 Released just five years after the launch of videos, according to Instagram’s blog, IGTV is a new standalone surface that allows users to post videos of greater length. Users will be able to watch the videos from the IGTV app, but also within the Instagram app.

Instagram has attempted to make the app resemble actual TV as closely as possible, hence why the videos play vertically as soon as the user opens the app. In addition, the publishers are considered  “channels” and users will automatically see videos from “channels” they follow, but still have the opportunity to explore customized recommendations. As stated by The Verge, IGTV users are initially able to upload videos up to 10 minutes, though, larger accounts are able to post videos up to one hour. However, it appears as though IGTV will soon allow all users to post hour long videos.

This app may be particularly useful for businesses, as it will give them another platform to publish videos, but in long form. There is also potential for longer video advertisements once Instagram opens the platform to ads.

The new Snapchat Spectacles are out and available for purchase! However, after a disappointing reaction the first time around, what makes these spectacles different from the last? Let’s take a look at the new and improved design.

For starters, Snapchat spectacles are sunglasses that have built-cameras for individuals to capture what is happening right before their eyes. The first design was launched on November 10, 2016.

As seen on the Spectacles website, the new sunglasses are much more neutral. The first version of the glasses were available in turquoise, coral and black. However, the second version of the glasses are much more subtle, available in onyx black, ruby red and sapphire blue. What’s more is that Snapchat Spectacles are water-resistant, so users can capture every essence of their life including the more adventurous activities and of course, the actual quality of the footage has improved.

According to TechCrunch, syncing the Spectacles footage to your phone is now quite simple, as it just requires the user to connect to Bluetooth and HD footage is then exported via Specs’ internal wifi. However, to some consumers’ dismay, Spectacles footage can only be exported to Snapchat memories, which means users cannot export to other apps right away or simply to their phone’s camera roll.

Snapchat Spectacles are now available to purchase on their website and cost $199.99. According to TechChrunch, the product is currently only available to consumers in the United States, Canada, United Kingdom and France. Although, by the beginning of May, more consumers in varying countries will have access to them.

As you may recall, Terabit has mentioned “Flipboard” in quite a few of our tips & tricks blog posts. Flipboard is a website/app that aggregates varying news updates for users to skim and flip through. Essentially, Flipboard is the modern newspaper – fully online, but contains the most recent news regarding everything from Tech to Travel. 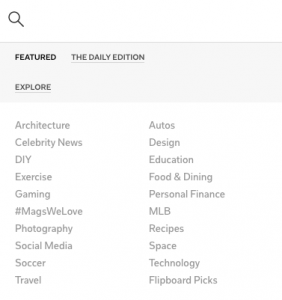 Tech Website, The Verge, reported that Flipboard has updated and expanded their platform. More specifically, Flipboard is furthering its Technology sector, which of course is exciting for all the tech enthusiasts like us! As The Verge stated, the tech section on Flipboard will include a more diverse assortment of curated articles and product recommendations to browse through. Flipboard’s Tech followers can expect to see stories, books, videos and more that recommended by publishers. In turn, this generates a more e-commerce feel, as profits are generated from affiliate links. 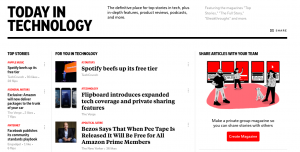 In addition, users will be granted the ability to send stories privately to colleagues or friends through Flipboard. Team Magazine aims to bring colleagues together to discuss important topics. It also appears to be a way to attract loyal and frequent users.

Snapchat and Instagram are two social media platforms that were created for varying purposes, but now share quite a few similarities and are often caught emulating each other. Stories, facial recognition filters, tags and so on are simple examples of the similarities between Instagram and Snapchat.

Just when user’s thought the two apps couldn’t get more similar, TechCrunch announced the launch of Instagram Nametags. Nametags allows users to provide an image with a link to their profile and in turn, others can use their story camera to scan the image to easily follow the user. This concept likely sounds familiar to Snapchat users, whom are used to utilizing the ‘snapcode’ feature that can be scanned to follow friends more efficiently on the app.

It is not clear when the feature will be rolling out to all users, but we will keep you posted with updates regarding Nametags.