The Latest Updates From Microsoft

Microsoft has made quite a few announcements in the last 24 hours – let’s take a look at what’s new.

Firstly, the tech giant has made a significant change to Microsoft Teams, which was initially introduced in 2016, according to TNW. Teams is a communication and collaboration platform that offers many features similar to Slack, including scheduling, notes and attachments. In addition, the platform merges the user’s Office 365 apps so files can be shared with popular tools, such as Excel and PowerPoint.

Microsoft Teams has not received as much attention as Slack and perhaps that can be partly attributed to the cost structure. According to TechCrunch, the communication platform previously had a $60/year fee, which wasn’t very appealing to small businesses when there was a free option available from Slack. However, just yesterday, Microsoft announced that there will be a free version of Teams available.

Along with the free version are packages offered for $5.00 user/month and $12.50 user/month. Highlights of the free version include 300 users, 10 GB of shared storage and guest access, to name a few. More features can be found on the Microsoft Teams website. 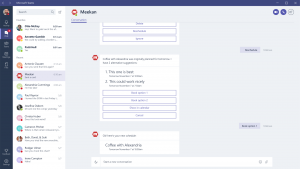 Secondly, Microsoft is rolling out the Whiteboard app on Windows 10, which is a collaborative app that was introduced last May according to TechCrunch. Microsoft describes Whiteboard as a virtual outlet, where colleagues can collaborate in real time, no matter the location. The app allows you to draw, write and create by simply using a stylus or your finger.

What’s more is that according to The Verge, not only are versions for iOS and the web coming soon, but Microsoft is planning on integrating Whiteboard into the Teams app.

It’s hard to deny the drastic increase of artificial intelligence (AI) that is being intertwined into our daily life. Along with the increase in AI products and services, however, follows the demand for the amount of people in the workforce with Artificial Intelligence knowledge. On Monday, Microsoft announced that they are “aiming to fill a skills gap” and in turn, launching an online program that offers courses to improve AI skills and knowledge.

According to the software giant’s blog post, the newest track to their online courses will be offered not only to software engineers, but to the general public, so anyone can expand their knowledge regarding AI and data algorithms. The program will offer valuable skills and knowledge applicable in real world settings and those who pass the courses will receive certificates verifying their success.

Microsoft stated there will be 9 different tracks that each take approximately 8-16 hours to complete and focus on teaching a variety of skills, including the know how, ethics and programming surrounding artificial intelligence. In addition, according to Engadget, enrolees will have three months to complete each course once it has begun.

The prices of the course have not yet been disclosed. However, this does seem like a beneficial tool and program for those interested in strengthening their AI skill set and resume. Furthermore, with the prevalence of AI in today’s technology, it makes sense for large software companies to assist in the transformation by educating current and aspiring software engineers.