“Digital wellness” and “tech addiction” are two common phrases used in today’s society. More and more individuals are becoming aware of the results of technological dependence. With rising concern, even tech giants, such as Google are trying to tackle the issue.

Lagging a bit behind the efforts of other tech companies, Apple too, has just announced new “digital wellness” features with the roll out of iOS 12. Take a look at what kind of features you can expect to see with the new iOS update: 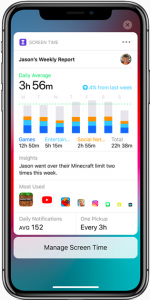 Many third party apps offer activity summaries that tell users how much time they’ve spent on various phone applications. As reported by Wire, Apple users will now be able to access their overall device weekly usage and app usage. This may help users decide which apps they should perhaps spend less time on. In addition, individuals will be able to set time limits on apps that appear to be used the most frequently.

Siri has also been incorporated into Apple’s digital wellbeing movement. TechCrunch states, Siri will suggest the background apps that should be turned off when they are not being uitilized, perhaps making it less tempting to use them.

Especially helpful for parents controlling screen time, Apple will now provide the option to set “downtime”. “Downtime” limits the amount of time spent on apps and locks the user out of the blocked apps during the desired periods.

Apple’s announcement regarding iOS 12 has numerous features and digital wellbeing is just one small part of it! Be sure to check out the other updates.